You Are Here:
Home
/
Endocannabinoid System

To understand the Endocannabinoid System (ECS) and how it works throughout the body, we must first understand how the brain communicates. The brain is the most complex system in the human body containing approximately 80 billion brain cells, called neurons, so it can be difficult to understand.

To make things easier, imagine you want to tell your friends something new; you could whisper it into their ears or say it out loud. Your brain communicates similarly to these two forms. The neurons within your brain make a significant amount of connections with other neurons to form networks. Neurons have been thought to communicate with each other by passing (“whispering”) chemical signals, called neurotransmitters, directly through these connections, but now we know that they also can spread messages more widely (“public announcements”) by releasing neurotransmitters from other parts of the neuron. These neurotransmitters carrying a message to trigger a reaction will travel from cell to cell before binding to its specific receptor. There are many types of neurotransmitters: some stimulate neurons, making them more active, while others inhibit them.

Now understanding how the brain communicates let’s turn our focus to the endocannabinoid system. The ECS is a biological system comprised of endocannabinoids, cannabinoid receptors, and metabolic enzymes. The function of the ECS is to help regulate the balance of the body, called homeostasis, to ensure our cells work within the optimum environment for success.

Endocannabinoids are small molecules that activate the cannabinoid receptors, like THC, but are naturally produced by cells in the body. The most popular endocannabinoid is a fatty acid neurotransmitter called, Anandamide. Anandamide was first identified in 1992 by Raphael Mechoulam, and translates to “joy” and “bliss”. It is been the subject of many studies which produce and uses only when called upon by the brain and may affect human behavior, such as eating, sleeping, and pain relief.

Cannabinoid receptors are found on the surface of the cell and analyze the conditions outside the cell. They relay these changes outside homeostasis to the interior triggering an appropriate cell response. There are two (2) major cannabinoid receptors; CB1 and CB2. CB1 receptors are abundant throughout the brain and central nervous system. This receptor has a high affinity (attraction) of THC and mediates the psychotropic effects as well as its therapeutic effects, especially in pain. CB2 receptors are more abundant outside the nervous system, such as the immune system. This receptors therapeutic effects are primarily activated where there is inflammation throughout the body and neurodegenerative diseases. Although each receptor has differing therapeutic effects, both can be found throughout the entire body.

The cannabinoid receptors become activated when introduced to cannabinoids, chemical compounds secreted by the cannabis flower that provide relief to a variety of symptoms. They imitate the endocannabinoids mentioned above to assist in maintaining homeostasis and health. The most popular of these cannabinoids are THC, CBD, CBN, CBC, CBG, THCv, THCa, CBGa, CBCa, and CBDa although cannabis contains nearly 85 different types. 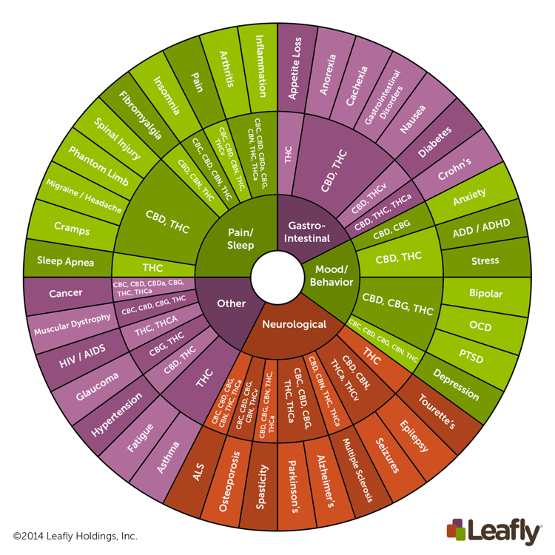 Finally, metabolic enzymes like, Fatty acid amide hydrolase (FAAH), are used to break down endocannabinoids within the ECS after they are used. This ensures that endocannabinoids like anandamide get used when they are needed, but not for longer than necessary. Without enzymes like this the human body the endocannabinoids would overshoot their required use for maintaining homeostasis leading to decreased response in our health.